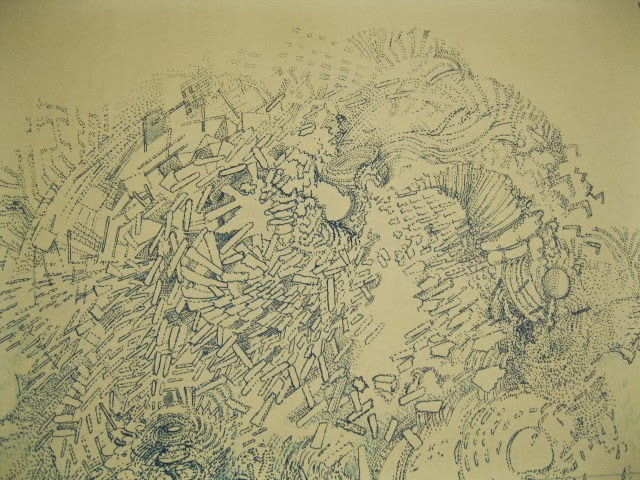 That voice within the whirlwind, that storm destroying all in its path, was also a hovering presence,a near image which I found inescapable during the late 1980's.  It seems strange to me now,  from the perspective of half a lifetime lived since then., but we live rather than choose our preoccupations.
I have noticed that there is hardly a Japanese anime which does not feature the carefully designed construction of an explosion, whether  the dystopian Ghost in the Shell or the fairytale epic Spirited Away. It seems to
be something than the makers of animated cartoons find impossible to resist. There is evidently something curiously reassuring  in tracing how something solid falls apart, in following the multiple trajectories of the pieces.
Apocalyptic scenarios are never-the-less related by the survivors. 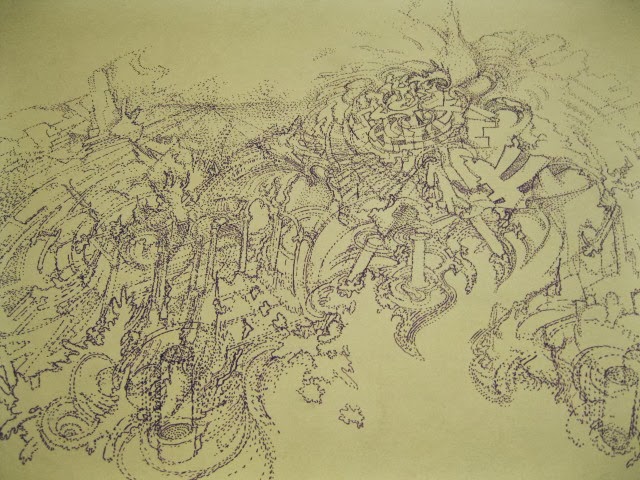 My storms were both destructive and constructive. In this drawing the columns may be toppling or erected.
I often imagined a  tempestuous force rise from a barren plain, holding a Golden City  on its crest like a waiter bearing a platter. Why should such an image haunt me so, and move my hand to inscribe it?
I related it, furthermore, to the Old Testament as well as the Dzhir, to the visions of Ezekial and Isaiah.
This was before my own circle was to be decimated, which was soon to occur, so there may have been an dimly perceived  element of preparation, of bracing myself for what was to come.  I am ,however, unsure
about the value of such an interpretation, or what it might be said to demonstrate, except that foreboding is seldom  entirely mistaken.
(These two drawings were done in the fall of 1988. What follows is
a poem of Charles Reznikoff's, based on the Apocalyptic Ezra; I copied it by hand into my journal of the spring of 1989)

Because I saw the desolation of Zion
and the wealth of the buildings of Babylon
I said to myself:
have the inhabitants of Babylon behaved so well?
And the angel, Uriel, came to  say,
"Is your heart troubled
because of this world, Ezra
and would you understand the Most High?
Then weigh for me the weight of fire,
measure the blast of the wind,
or call back a day that is past."
And I answered, "My Lord, what man can do these things?"
And the angel said:"If I asked you
how many springs in the sea?
what are the paths to heaven?or the gates of Hell?
you would say, I have never gone down
into the depths of the sea,
or to the  gates of hell,
nor have I climbed up into the sky.
But I asked you about fire and the wind and the day
--which you know well--
and yet you could not answer.
then how are you to understand the  Most High?
And I answered," It would have been better for me
not to have been born
than to live and suffer without knowing why.
else why have I been given a mind?
Why has Israel been abandoned to the Heathen,
and the people God loved to godless tribes?
If the world was designed for te righteous,
why do they not have it,
and are ruled by people like spittle? Why?
The Angel, his face bright as lightning,cried:
"Do you think you love Israel more than his Maker does?
The days will come when the evil men do
will be greater than anything you see
and whatever you heard of long ago
and those of one city will ask of their neighboring cities
has any good man passed through
and in the neighboring cities they will answer"NO.
Chasms will open in many  places
and out of them fire will not cease to blaze,
even the birds will leave the land.
The sweet waters will turn salt
and friend suddenly turn upon friend;
women will go into labor and be unable to give birth.
Just as a farmer sows many seeds and plants much
but the seeds do not all take root nor do all the plants sprout
so do those who have come across the earth:
out of a cluster  a  grape will be saved
and out of a great forest a fern.
Mourn not  for the multitudes who perish:
for they are like a breath and like smoke
and like a fame that burns until it goes out."

And I, Ezra,prayed:
"God, at Whose Word
the host of Heaven changes into winds and fire--
and it was so when all was dark and  silent
and the voice of man was heard--
What is man that you are so angry with him? -
Give us
the flowering of a new heart--
light a candle of understanding in our hearts
Lord
that everyone who is corruptible and whoever
is man in the image of man
may live"
.

Posted by phillip larrimore at 12:49 PM