The images of heavenly choirs received by the Abbess Hildegarde von Bingen are much the same images reported by sufferers of migraines according to Oliver Sacks. 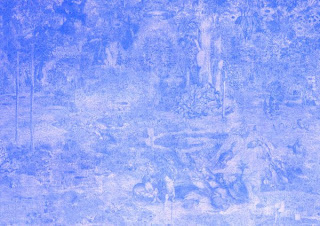 When Leonardo wrote of being able to see fantastical shapes in the stains on a wall which had been much-spat upon, he was pointing to a basic facultyof the mind, says Valery:its tendacy to scrawl monsters on the margins of pages.It is as if we have an image-making device, the opposite of a screen-saver, which begins to doodle whenever a lecture gets dull. This faculty is related to but not synonymous with an eidetic mechanism, the talent of finding forms and faces, even illustrations, among patterns--such as those made by foliage--or shapes, such as those of clouds. 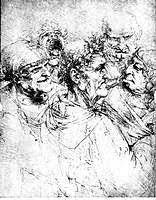 According to the art dealer Ron Feldman, Leonardo habitually concealed anamorphic imagery or visual puns throughout his paintings.This sounds right, but is hard to honestly confirm once one's own eidetic impulses have been triggered. Once we have started decoding hidden faces we will find hidden faces whether or not they are to befound. The great Safavid dynasty master of the miniature, Sultan Muhammed, hid them in the rock-work throughout his masterpiece, The Court of Gayumars, but though I have tried to locate each of them there remains a question between what I am actually seeing and what I think I see and am projecting myself, which baffles my account. 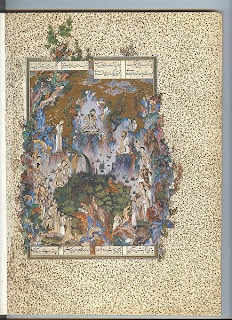 Wallpaper and other patterning metiers such as Indonesian batik or Ikat weaving do this in a different way, via the shifting in a pattern between foregroundand background. To be able to do this rhythmically is possible with geometry alone.To do this with fluidity requires the arabesque.
What Dean Byington does with wizardry is move among these levels. His paintings are collages of frottages disguised as wallpaper. This involves copying copies, blurring,enlarging,re-engraving, disguising, sewing up seams. Patterning camouflages illustration,and vice-versa.The one becomes the other's ground.
Enlarging a detail as large as I could on my computer screen simply captivated me with his ingenuity:it looked like an engraving by Hercules Seghers shading off into what might be an illustration for La Fontaine's fables by Gustave Dore which filigreed into lace-like or leaf-like reticulations. What fascinated was how seamlessly they mesh.
Quite without data or empirical proof, they seem to me to be work at the threshhold where images become stories, where the idioretinal aftermages on the retina of the sleeper coalesce into a dream. In this case, one does not have to be asleep to see.
Posted by phillip larrimore at 4:01 AM