IN PRAISE OF SHADOWS 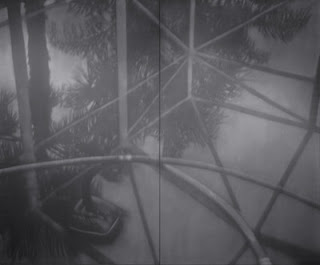 IN PRAISE OF SHADOWS
Talking years ago with the late Jessica Mitford on her bungalow porch in Oakland, I discovered that she,too, thought the motel journey in Nabokov's Lolita took half the book. It takes seven pages. This is due to Nabokov's magicianly art, which gives narrative heft in the form of memorable details keenly observed and put. W.G.Sebald's spiralling tangents have a similiar effect. And here is Tanizaki's IN PRAISE OF SHADOWS, merely twenty five pages long. I had thought it the length of a short novel. This is thanks to its implications.
It is a study in contrast between the old ways of Japan and their rapid transformation--or destruction--because of westernization. Shiny surfaces,electrical lights and their garish relationship to the traditional Shoji screen,the glaring white porcelain western toilet, the electrical fan, all are subjects of Tanizaki's eloquent grumbling.He misses the patinas of darkness, the way shadows overlap and deepen in niches,textures polished by handling but otherwise unadorned. Japanese buildings seem like umbrellas to him, their roofs spread out beyond their walls to protect their inhabitants from rain; western buildings seemed to him like towers with caps. All around--for he is an inveterate nostalgist--he sees mindfulness sacrificed to efficiency, textures to legibility, and the resonance of shadows banished from brightly impersonal hospital-like modern dwellings.
The spell of Tanizaki' is such that on finishing his essay one wants immediately to turn off the lights.This is where it is newly relevant.I remember a snowfall of five years ago which put out our electricity for almost a week. We immediately entered an older rhythm, a candlelite rhythm, and woke at the crack of dawn. When the electricity came back on ,it was with a great deal of noise. The television was like the announcement of a perpetual catastrophe. The look of a light-flooded room at midnight seemed suddenly un-natural. The items of nostalgia for Tanizaki may be specifically Japanese but the sensation is universal. It is nostalgia for nature.
That emptiness, the abscence of technology, the prescence of shadows or darkness ,might become the ne plus ultra of luxury is something Tanizaki implies throughout.If only the rich can afford NOT to have cell phones, he is right, of course. And near-emptiness has already proven to be a commodity over the last forty years:think of the prices a Mondrian, a Rothko, an early Brice Marden or a Yves Klein monochrome, a Robert Ryman white painting--not to mention a Malevitch!--command. The larger the population,greater the premium on emptiness.
Darkness, likewise, becomes a matter of inverse de luxe in Tanizaki, finding its ultimate expression in the ever-dark alcove of a windowless room through which falls, never-the-less,the faintest tinge of light through its walls of rice paper. This brings to mind James Turrell's beautiful early installations, literally large rectangular holes in the walls, faintly lit themselves by very indirect illumination. Turrell had seemingly found the exact degree of dimness at which the human retina starts to scintillate, for this wall-space seemed both deeper than it was, and visually active, active with the apparition of something nebulous nearly but never to take form.It recalled Proust's phrase, "the kaleidoscope of darkness".
Troy Brauntuch's paintings, which are given wide currency right now, do this differently.They are representations of, say, a stack of shirts depicted as under a light so dim as to be near darkness.The eye adjusts accordingly, in stages in viewing a Brauntuch...as it does in life.What he offers us is the great luxury of being able to reach for the subject matter when almost everything else grabs at us. The problem of darkness is converted to the pleasure of re-searching it.
Shadows, too, are increasingly present in our art,after having been almost entirely banished from the hard bright art of the 'sixties.Virtuoso shadowcasters could be nominated from a number of approaches, hugely different, the celestial mechanics of an Eliasson casting shadows of a different genre from the shadows cast by the trellised structures of Christina Iglesias.Some of the best, and least known,work of Andy Warhol is his shadow-paintings;his shadows slice the field of the canvas much like the anamorphic death's head in Holbein'sAmbassadors does, and for similiar reasons. Warhol's shadow is a reminder he must die and that he still remains; it is an integral part of making something fleeting permanent----more permanent than one's own fleeting self.
Perhaps we, the public, will become connoiseurs of shadows, too, fleeing neon glare for retinal quietude. The greatest rebellion in a culture which demands more efficiency is to grow slower. The antidote to hyper-information is silence. The nuances sacrificed for impact take a life of their own. Tanizaki 's essay, meanwhile, also reminds us that our interest in the fleeting, the immaterial, the shadowy, the near-minimal,the pregnantly empty, and voidness,began not with phenomenology, or its adjunct, minimalism, but in the concious poverty of Zen Buddhism, and the generative emptiness of the Tao.
(painting by Troy Brauntuch)
Posted by phillip larrimore at 10:14 AM