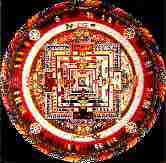 Watching the Tibetan monks meticulously construct a mandala made of powder of malachite, granulated lapis lazuli,topaz ,and other rare gems and minerals was an education.The technique involved spooning these powdered gemstones into a horn-shaped receptacle with a narrow spout from which these ingredients fell grain by grain. This naturally was done to the recitation of sutras.
The mandala they were constructing from particles of sand was the Kalachakra mandala. To briefly synopsize its iconography would require starting from the center with Kalachakra, multi-armed,and his consort deity, Vishvamata, the eight female deities surrounding them, copulating deities in the second enclosure--the males with three heads and six arms-- and so forth down through the fifth and outermost level.An inventory of the subsidiary deities gyrating in their own wheel of enlightenment or their own mandorla would take a page.
I went to view the monks--who were performing this ritual at the Museum of Natural History in 1988--a number of times,which was possible as it took two months to construct.On one such visit I spied someone among the novice monks who I had last seen a decade before shooting up with one of Warhol's lesser superstars. But I was not present when the mandala was taken to a pier, and there with ritual prayers dispersed into the river. 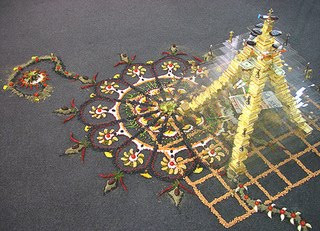 A Process such as this as this may seem remote from the concerns of a contemporary artist but appears to be at the root of Joe Mangrum's work. He has been making mandalas with his own toys and with his own methods since the mid-nineties. The word "toys" is accurate, as these include plastic soldiers and jungle animals. He has also used bullets,and compact disks.Also, in his more perishable altars, the petals of flowers such as Jane Magnolias, Birds of Paradise, or Heliconias from New Zealand.Stupa-like forms uphold these objects as well as sea-shells,twigs,twine, crepe banners, prayer flags, etcetera. Symmetry anchors this profusion. Somewhat.
His basic formats are not really western but the grids from which the Hindu forms are extrapolated. This is one of the few times that they have been used successfully by a western artist that I know.(The other instances,paradoxically,are in ' minimalists' generations and continents apart, in Malevitch, Ad Reinhart,Sol Lewitt, and by remotest retinal suggestion Agnes Martin.)
There are altars for ecological causes, against war, and for world peace. I don't regard their idealism as stupid, but as a dire need.
Lately, Mangrum has been making sand-paintings throughout Manhattan,twenty-two at last count.The colors are idioretinal, as in a Huichole yarn painting, or a Van Gogh, the forms wheelswithin wheels rather than mandalas.They share the quality of construction via reiterated prayer with his earlier work. He takes the altar-making process to the street.It's a blessing. 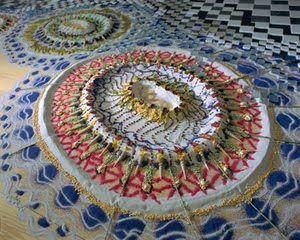 Posted by phillip larrimore at 10:22 AM