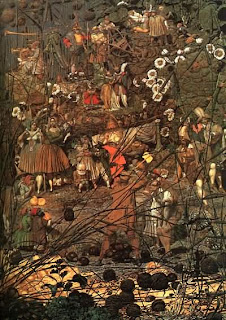 "...Richard Dadd,spending nine years, from 1855 to 1864,painting the FAIRY-FELLER'S MASTERSTROKE in the madhouse at Broadmoor, England. A fairly small painting that is a minute study of just a few square inches of ground--grasses, daisies, berries, tendrils of vines, hazelnuts,leaves, seeds--in which the depths of which there appears an entire population of minuscule creatures, some of them characters from fairy tales and others who are probably portraits of Dadd's fellow inmates and of his jailersand keepers. The painting is a spectacle:the staging ofthe drama of the supernatural world in the theaterof the natural world. A spectacle that contains another,a paralyzing and anxiety filled one, the theme of whichis expectation:the figures that people the paintingare awaiting an event that is about to take place at any moment now. The center of the composition is an empty space, the point of intersection of all sorts of powers and the focal point on which all eyes are trained, a clearing in the forest of allusionsand enigmas; at the center of this there is a hazelnut on which the stone axe is about to fall. Althoughwe do not know what is hidden inside the hazelnut, we know that if the axe splits it in two,everything will change:life will commence to flow once more and the curse that has turned the figures in the painting to stone will be broken...(from THE MONKEY GRAMMARIAN by Octavio Paz 1981;trans. Helen Lane)
Posted by phillip larrimore at 9:41 AM