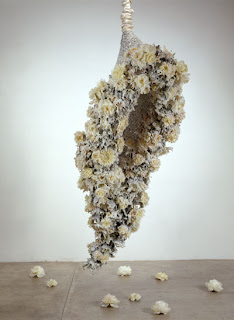 "...the black fugatos are strumming the black of the black...Thick strings stutter the finial gutturals.He does not lie there remembering the blue jay, say the jay.His grief is that he mother should feed on him, himself and what he saw,In that distant chamber, a bearded queen..."(Wallace Stevens:Madame La Fleurie)


Space in our time has grown steadily more eccentric, more nest-like than building-like. It is as irrational as Mies or Mondrian was rational. Architecture seems to be attempting its own dis-embodiment, and sculpture a space which makes earlier installation artseem almost classical.If there is some familial resemblance to Conceptual Altar Space or Immersive Assemblage Space, it is a Gothick decade later, with its mutant concerns.

A sculpture of braided horse-hair ensnaring a tide of silk roses punctuated with hyper-alert taxidermied pheasants and plovers, as do the sculptures of Petah Coyne, turns the whitest cubicle into...what? The names which one comes up for it---gesticulative spatial expressionism or Carnival of Souls Rococco--are absurd, but the work is a marvel.

Coyne's work first reminded me (A)of a Victorian relict seen in a great home, a floral arrangement made of the rosettes of braided hair of the female family members and kept under a bell-jar (B) the women's-training- hospital ghost in Maxine Hong Kingston's Woman Warrior, which abided by day in a pencil eraser but which by night rolled around on tenacled eye-balls to crush the breath from the sleeping(C) Poe's mystical yearning for Annabel Lee and/or Ligeia(D) Hearses from a horse-drawn time (E) Bernini. It is the sense that the sculpture turns the room on a centrifugal force of its--the sculpture's-- making which brings up Bernini. Coyne's work seems to tilt the room off its armature.

In a Bomb interview with Lynn Tillmann, Coyne spoke admiringly of Miss Havisham in GREAT EXPECTATIONS, the Miss Havisham of the sealed off wedding-banquet chamber,whose wedding cake was colonized with rats and festooned by spiders, who had not changed from her wedding gown in thirty years after being jilted at the altar. This accounts, indirectly, for the sense of her earlier pieces being like brides and their own cast-off bouquets, a synthesis of the wedding and the funeral. Miss Havisham alarms us because in some sense she is buried alive,like Madeline Usher or Persephone. She becomes the death-bride ; the Russian surrealist Tchelitchev referred to her as the White Lady.

The myth of the rape of the bride by the underworld is more central to modernism than is commonly observed. It appears not only in Poe, among the pre-Raphaelites, in poets as different as William Carlos Williams and Rilke, but was critical to the early days of feminism, which attempted many revisions of the myth of Persephone. Obviously, it marked the strong sense among women that they had been seized, captured, and confined--entombed-- in unwanted identities.This is a political truth with an historical dimension, as events in the world testify. It is also a metaphor for the imaginative faculties of the human Psyche under warrant, hence its appearance in Dickens and Poe. This is the Self kidnapped from Ceres, or Mother Nature,by Pluto ("RICHES"), into the airless and artificial mirror realm of cunningly be-jeweled counterfeits. According to Guy Davenport, it is the diagnostic myth of the mental illness of western culture from the nineteenth century on.

This is the vein that Coyne taps. The artists she cites as influences--Louise Bourgeois, Eva Hesse, Anne Hamilton--don't form a school or even resemble each other much, but they do outline a geneology.The keen awareness of the abjection of the flesh, the tumnescent neediness and the decay of the body, are Bourgeois' contribution; the de-regulation of minimalism in favor of a willed awkwardness,lopsided eccentricity,is Hesse'--along with her tangled skeins. Ann Hamilton provided both hair-as-metaphor and hair quite literally, as she gave Coyne the horsehair used for her 1993 DIA installation-- those famous stairways covered with hair. What these artists have in common is the will to revise further and further into the intuitional unknown. There is nothing neatly rounded off or pat about any of them.

This is why I don't think Coyne's work is kitsch, as it has been accused of being.Those undulating beds of roses, each with their own separate sigh, animating each otherby implication, over which some fatal candle has dripped, and which are interwoven withthose aforementioned birds and leaping taxidermied squirrels, remind me of a constellation of things without being quite like anything else I've seen. That's a complex response. And formally what keeps it far from cliche is Coyne's feeling for orphaned forms, for fungal shapes and weed shapes,the way twigs are plaited together by the flood which casts them ashore as detritus, by algae, and stumps, and curly willow, by the revival and transmutation of life through the process of decay.Those upsidedown bouquets which are also chandeliers or those biers which appear to rustle are also nests in which souls seem to gather. She calls them her "girls".

Posted by phillip larrimore at 3:45 PM