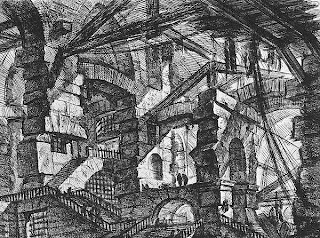 Ruins, of course, have been a leitmotif in western art since Claude Lorrain and Poussin. What is different now,perhaps, from the period of the baroque with its nostalgia for the pastoral, or the Enlightment with its grand seigneural overview of civilization's rise and fall in the form of a folly, is vertigo. This begins--it is a commonplace to say so--with Piranesi, both the recorder of the vestiges of imperial Rome, and the fabricator of the Carcerari, the Prisons, those dark interiors replete with huge intruments of torture and tiny humans,whose spatial ambiguities are said to presage cubism. They come with a distinguished literary geneology, moreover, ranging from Choleridge and de Quincy to Marguerite Yourcenar.

De Quincy, who devotes pages of Confessions of an English Opium Eater to the Prisons, projects a curious error on Piranesi's etchings. He finds in one the figure of Piranesi himself (how he is so identified is unknown) who is seen not only on the ground floor of one such prison,but at intervals on the stairs. He finds in Piranesi, in short, the same effect which in heraldry is called mis en abyme, in which the image contains an image of itself and that in turn an image an image of itself ad infinitum.But couldn't these receding figures on the stairs be Piranesi's descendants rather than Piranesi himself? There would be not only Kafka, then, but Borges, and Dino Buzzati, and the Cavafy of The City, and M.C. Escher and George Tooker among visual artists. Several artists of our time might find themselves on Piranesi's stairway, among them Anne and Patrick Poirier, Cheryl Goldsleger, Jean-Michel Fauquet, and most recently,the photographer Lorie Nix. 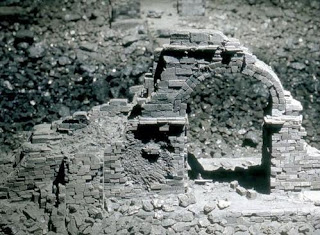 I am trying to remember where I first saw the Poirier's early work--Sonnabend? The De YoungMuseum? They had constructed a vast ruined neo-classical city out of charcoal in a dim room .It had stadiums, temples, monuments, a fallen colossus, racetracks, and thoroughfares.We viewers loomed above these like titans in mourning. I found the work unsettling then--charcoal was once wood and the wood a tree:now it is burnt; an altogether more symbolically freighted material for models than cork.There was also the sense of clumsiness that being a giant in the near dark provoked, a sensation almost of guilt at the ruin of such a vast-if even-so miniature civilization, as if we off-stage were somehow at fault.Finally, there was what we might call the Ozymandias effect, a mixture of regret with relief at the passing of civilizations,for so many monuments have been made under the whip, and not only during antiquity.

Charles Simonds, at about the same time, was covertly placing his tiny and artfully constructed models on fugitive sites through the Lower East Side.If the imagery of thePoiriers might be described as Graeco-Roman with a dollop from Roland Topor's cartoon epic,the Fantastic Planet added, Simonds' seemed to derive from the abandoned cliff dwellings in New Mexico or the bee-hive shaped brick structures--prototypes of the dome--originating in Cappodochia. He invented an anthropology of the little people who had dwelled there--it was an age of anthropology, with the semi-Utopian counter-cultural aspiration to posing alternative social structures--and his placement of these beautifully constructed buildings was done with the co-operation of the neighborhoods,which were then mostly poor. His work is now in museums, and the neighborhoods are high-rent. 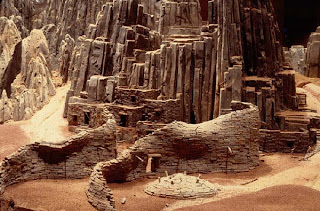 A salient feature of the Carcerari is the wedding of the constructive with the destructive , a quality especially noticeable when the earlier versions are compared to the much revised later plates, which sacrifice coherency for depth. The earlier Prisons are buildings; the later Prisons are buildings and the destruction of buildings and the reconstruction of buildings over the relics of their destruction.It is this quality of multiple perspectives which causes them to be cited as proto-cubist.

Something of this multiple-perspectivedness is to be found in the paintings of Cheryl Goldsleger, whose work, on first glimpse,seems to be a skillful depiction of early Renaissance or late nineteenth century Beaux Arts architecture, but proves on inspection to be many layers of depictions of such buildings skillfully --I am tempted to say almost harmonically--sequenced to co-exist, as if we are viewing their construction through layers of time. Her colors are mostly amber, honey,and black, remindful of architectural drawings of Bramante or the Sangallo clan, done in sepia or bistre. Now and then she will overlay what might be called a "memory scaffolding" over the other layers in white. She glazes a sedimentary metaphor for time on the flat surface of canvas. 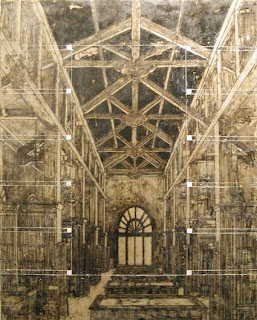 Two others I admire who also use architecture to metaphorize the workings of time are Jean Michel Fauquet, who does sequences of dark stairways descending (they don't appear to ascend)into oubliettes, and Lori Nix, whose recent photographic sequence, The City, is a surveyof the imagery of disaster.Nix has had to take pains to clarify the point that these works were conceived before the destruction of the Twin Towers. This says more about our historical attention-span than her art.Nor would post 9/11 imagery account for a vein of humor in the dread--there is an archaeopteryx or pterodactyl or something with leathern wings not to be found in an aviary flying above the ruins of" The Library". The aquarium has pools of recent fishes on the floor.The museum of natural history is in ruins but its dioramas are intact.Here is an interior of a clocktower, obviously defunct.It looks exactly like where I would liked to have lived as a boy.There is a vacuum cleaner show-room, the view outside its window overgrown with bramble.These are painterly photographs of exquisitely fabricated images of destruction. Their colors are saturated, autumnal,sunset, with the streaked skies of storms only recently receding, of broken columns--a repertoire of romantic cliches revived by a hint of parody:they are toy tableaux after all,which evoke concrete disaster. 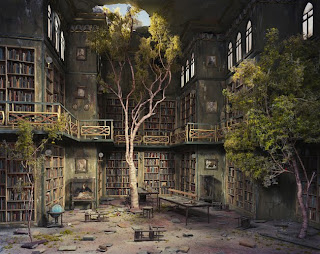 Anne and Patrick Poirier show at Sonnabend
Cheryl Goldsleger at Kidder Smith in Boston(but I saw her work at Hodges and Taylor Gallery in Charlotte, N.C.)
Jean Michel Fauquet at Chaim Hanin
Lori Nix at Clampart in New York and MillerBloc in Boston
Posted by phillip larrimore at 4:33 PM