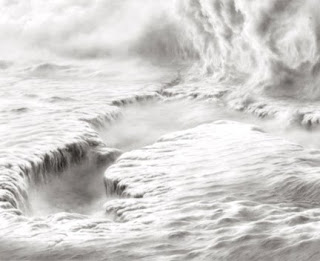 Among the lesser known works of Poe is The Narrative of A. Gordon Pym, a saga of a stowaway aboard a vessel undergoing mutiny, of cannibalism and of lots being drawn to see who would be eaten, and finally of an expedition into the hollows of the earth where an in-world exists which may be entered via antarctica. It was sold and published as a factual account, Jules Verne wrote a sequel, and hollow-earthers still cite it with fixed conviction . It is one of the great landscapes of a peculiar time and climate, at the end of the age of a world map with tracts marked terra incognito and the industrial revolution.It is strange that two very different painters, working on a modest scale, should evoke its tonality a century and a half later, the tonality of nascent science fiction and the romantic sublime.

Hilary Brace is one of several artists of whom I am aware who works with charcoal on mylar. Her draftsmanship seems nearly photographic but her content-- of spaces which could be macrocosmic, like the Magellanic clouds, or microscopic, like an xray of the aveole--conveys neither locale or scale despite its graphic clarity. Looking at them over intervals, I find some principle of compression, of shrinking a big vision into a narrow compass, keeps them from being facile; they cross a territory of an ominous brightness,dawning in a place which is vast and very cold.Something not quite remembered at the tip promontory of collective memory.

Roland Flexner's sumi ink and soap bubble drawings have a similiar effect. His work is as dark as Brace's is luminous, but a similiar skill, the skill of sheering off into metaphor- thwarting ,is one he shares with her. I thought when first viewing them that these are landscapes, of course--but the "of course" is due to the desire to interpret a bisecting line as a horizon, a swirl as a vortex. Actually it is heuristic device by someone expert at brinksmanship. The blackness of the ink instantly brought to mind Milton(I'd been rereading Paradise Lost):
"a dungeon horrible on all sides round as one great furnace flamed; yet from those flames no light; but rather darkness visible.' 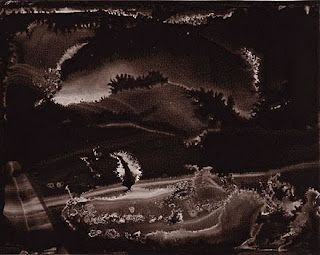 but what is being depicted might also be as unapocalyptic as a forest at night viewed through a rain-streaked windshield.Not every abstract work has this image-permutability, or this memorability.Flexner has the ability to convey grandeur in a the span of few inches -like Blake, or Samuel Palmer.
According to the press release, Flexner's last show at D'Amelio Terras was shown with Japanese "looking stones", which I have not seen but which I suspect I own something like. One of these is a chrysaloccoca given me by the late Bill Martin as we viewed a butte between Santa Fe and Taos New Mexico. The stone I held in my hand resembled in extreme reduction the monument before us. These painters evoke similiar sensations of the reversal and re-reversal of scale.
Brace is represented by Edward Thorp. Flexner is shown at D'Amelio/Terras in New York and Hosfelt in San Francisco.
Posted by phillip larrimore at 4:17 PM