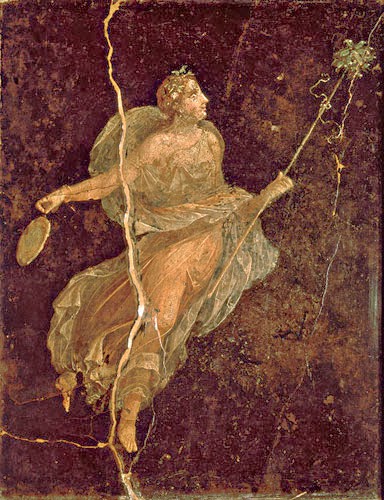 This Maenad, who appears on a wall of the Villa of Mysteries at Pompeii,
has long been an emblem of inspiration for me.  I have usually managed
to have a postcard of her up somewhere, no matter where I have lived.
(There was a time when I lost such a postcard, and there was an odd,
lingering uneasiness to missing her image which I did not quite rid myself of
until I found it again.)
I associate her with a poem of Goethe's, In Tausend Formen. Here are
a few of its stanzas, which Christopher Middleton put into
English:
Take on a thousand forms, hide as you will
O most beloved, at once I know 'tis you;
Conceal yourself in magic veils, and still,
Presence in All, at once I know' tis you

The cypress thrusting artless up and young,
Beauty-in-Every-Limb, I know 'tis you
The channelled crystal wave life flows along,
All Gentling Tender One I know' tis you.

This presence is something I sense continually, and just as the Maenad
might serve as its emblem, so Goethe's poem might serve as its song.
As a process, it might be described as seeing the Nereid in the
water and the Nymph or Dryad in the wood . It is elusive,
continually changing, shape-shifting, on the margin of appearance.
Certain of paintings or constructions of mine may be described as
nothing more than devices for sensing this presence, or
as records of my sensing of it. This is less singular,
and less pathological than it might seem to those who
do not envision this way, but it is a strong feature of
Dante's poetics in the tweltth century, and of Eugenio Montale's
in the twentieth. In painting, I would hazard to
describe it as the moment when something "abstract"
flickers or to distills itself into the  "figurative". (But I
dislike this terminology, which seems irrelevant to me:
I have always inwardly doubted whether there is
really much difference between them, other than focus:
if we do not know what it is, it is "abstract"; if we can recognize
it .it is "realistic").
This is one of the most recent "Nereids", done on four layers
of aluminum screening. it was done in 2012. 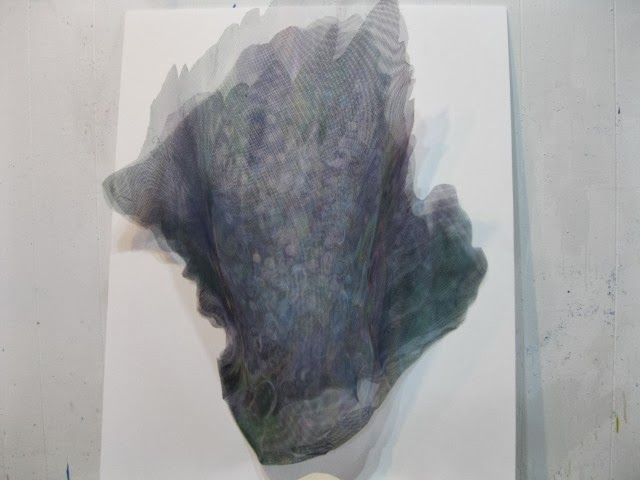 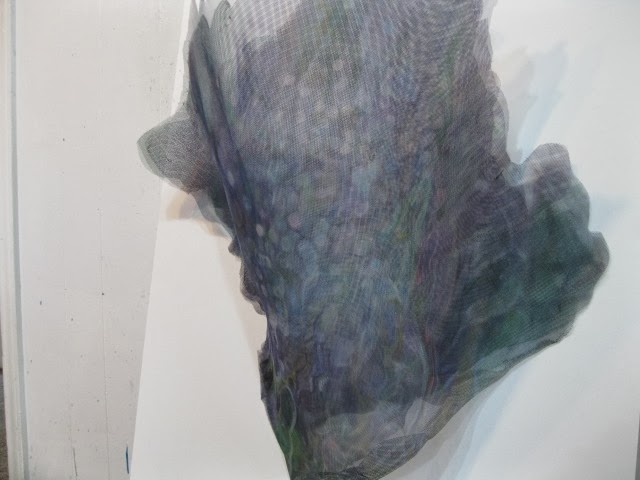 Posted by phillip larrimore at 2:49 PM