HOW ONE THING TURNS INTO SOMETHING ELSE (HEBE) 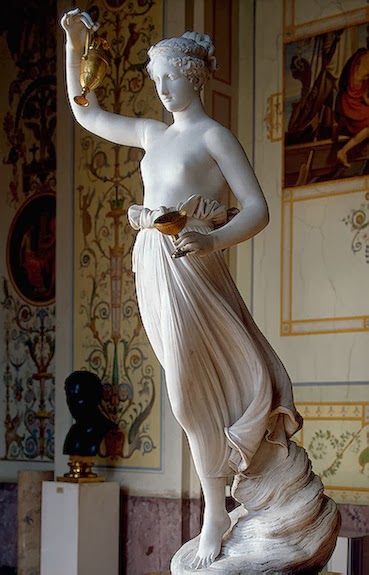 The paradox of flowing drapery rendered in marble has always seemed sexy to me.
It is actually a multiple paradox (or paradox multiplied by another paradox and yet
another). There is the rendering of the impermanent into the" permanent"---  the
human form into statuary--- the suggestion of nudity by way of drapery--
the flowing by the motionless-- the  fleeting moment frozen in time---poor.Hebe will never
undress.

It would almost seem that such a statue  is upheld by the interplay of crisscrossing
paradoxes, and that,lacking them, it might topple and fall. It also helps that it
is marble.
.
To extend  these paradoxes further by transforming a sculpture into a painting, a painting
into a construction,an academic work into an experiment , was my purpose in adopting
Canova's Hebe to a four layered aluminum screen painting.

There was also the sexiness of flowing drapery, in marble or not. 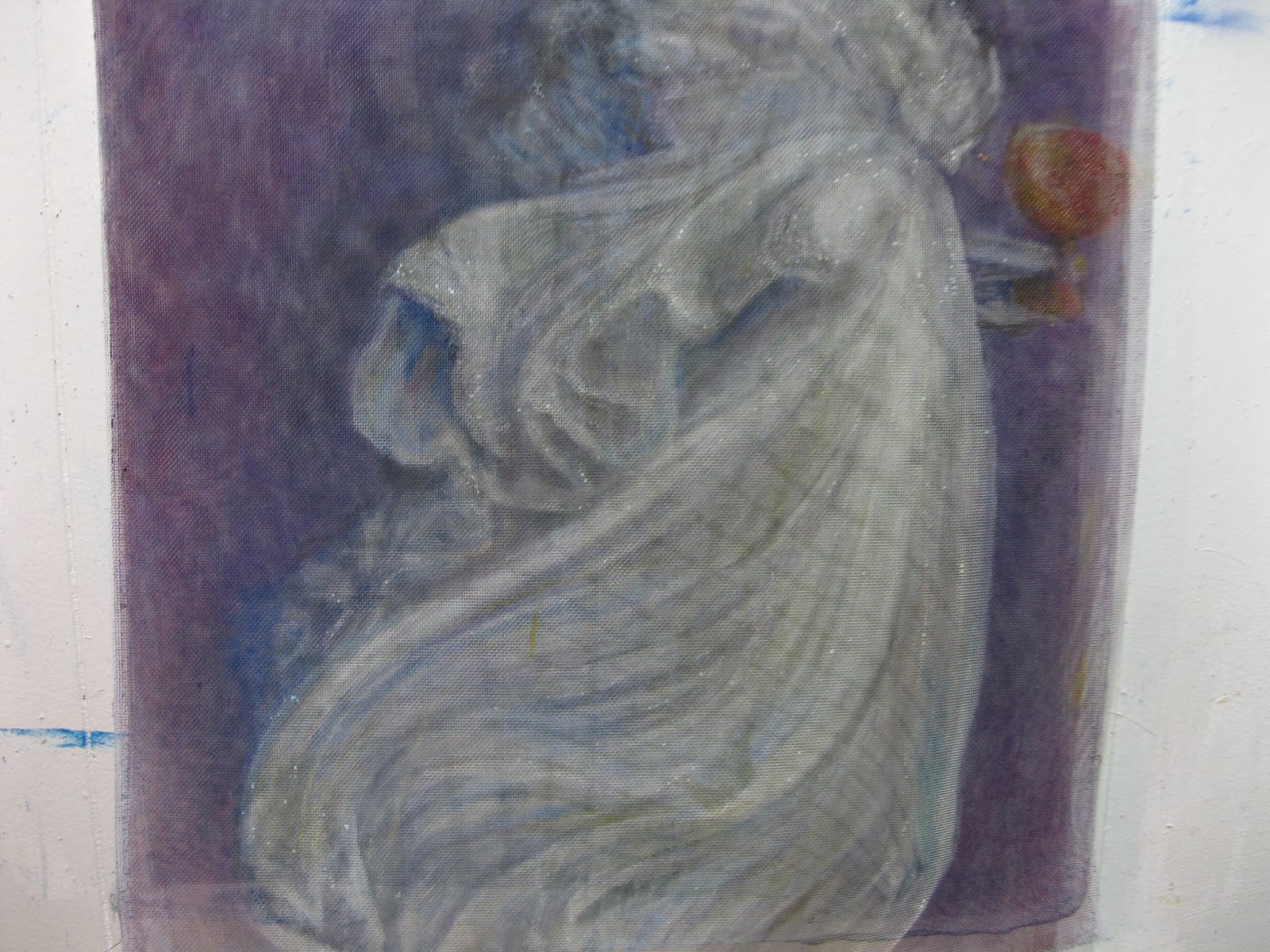 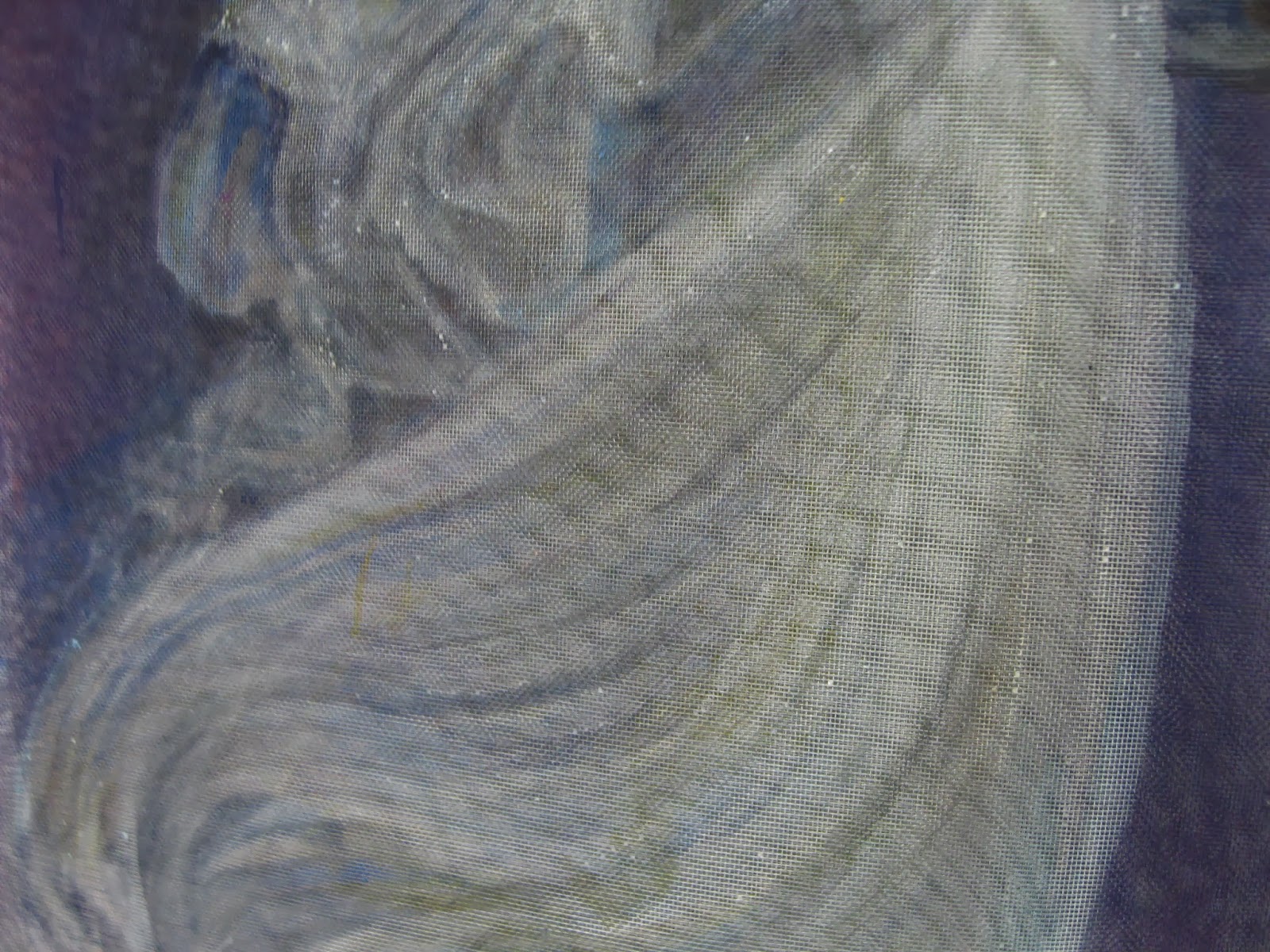 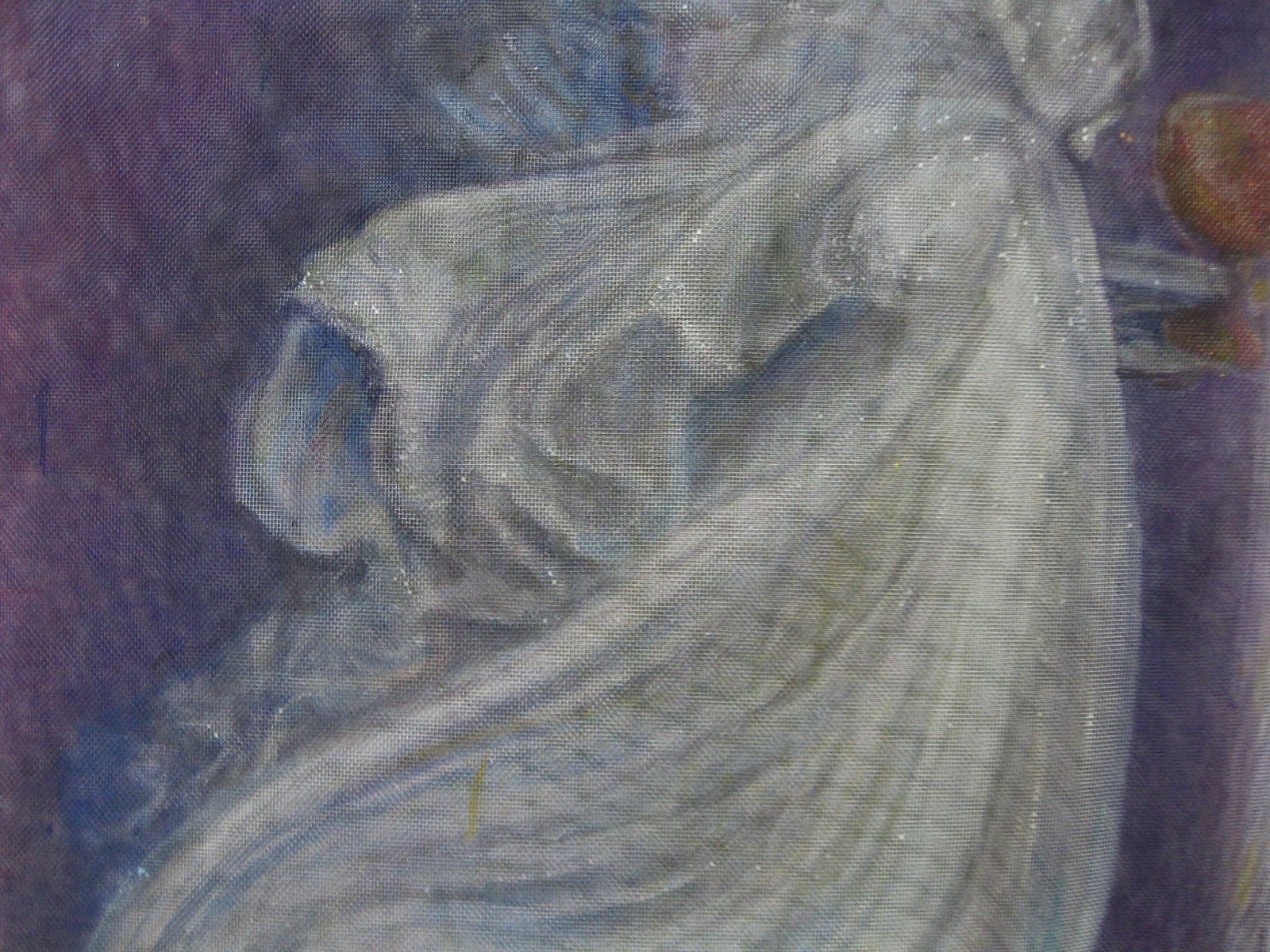 I choose Canova's "Hebe"-- she was the Roman Goddess of Health--because Canova
has always posed an additional puzzle to me, that  of an artist whose technique
outstrips his affekt,  whose parts are superior to the whole.
He is sublime at drapery, but deficient in feeling.
(It occurs to me now that another paradoxical premises was at work--that of
reconstructing a statue from  its photograph)

The first three photographs illustrate the screen painting version. What a photograph can not convey is
how the shimmer among the four images--one on each layer-- seemingly billows and  ripples with motion.

The  photographs below
illustrate the two constructions--or free standing sculptures--- made of a four layer
painting on screen from a photograph of a sculpture. The first of these attenuates a
"Canova "into  a "Giacometti,"..

I am not quite happy with the third and may change it into something more like a relief..
(It  might thereby  fall into the category of a Nereid.) 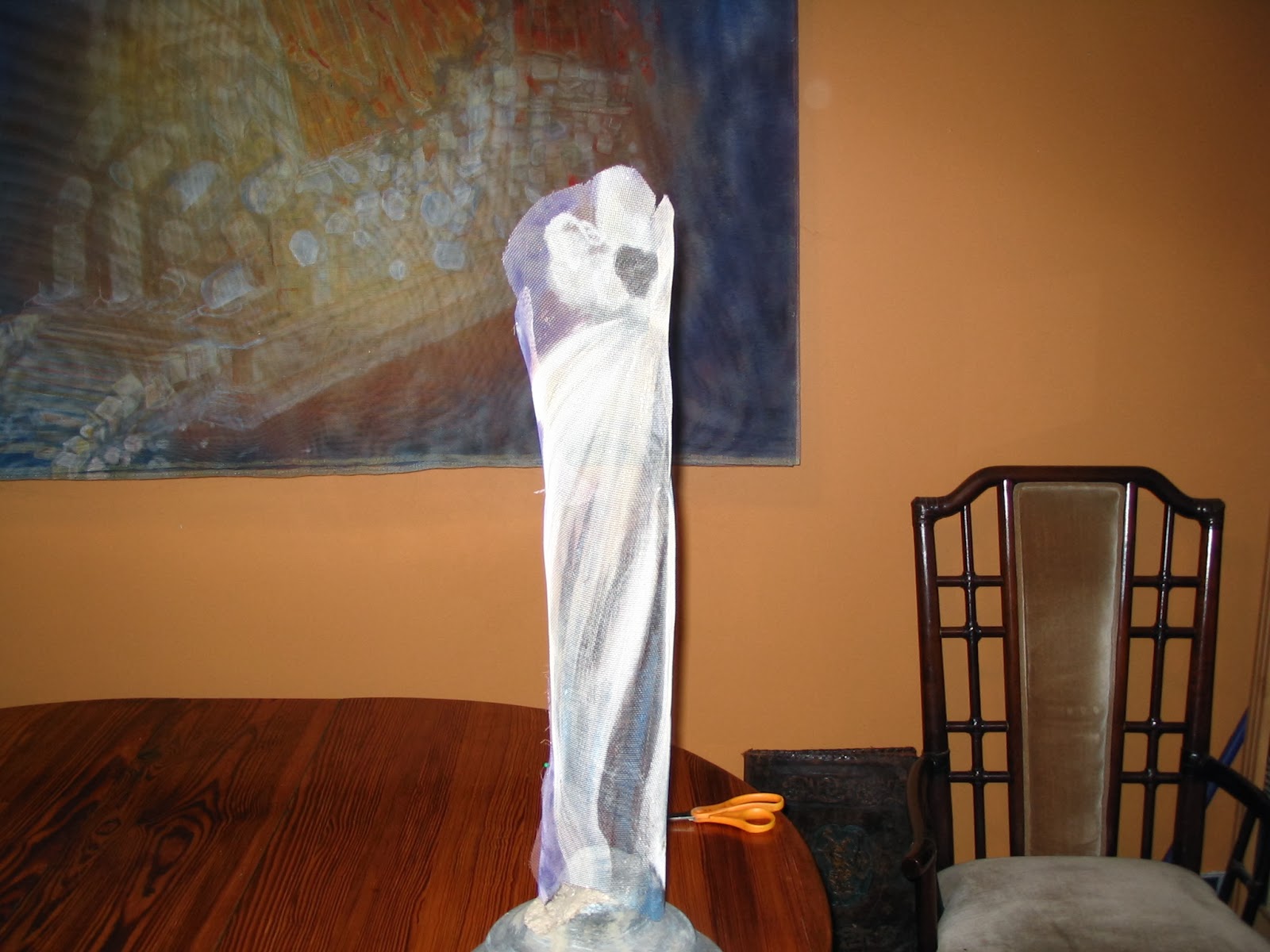 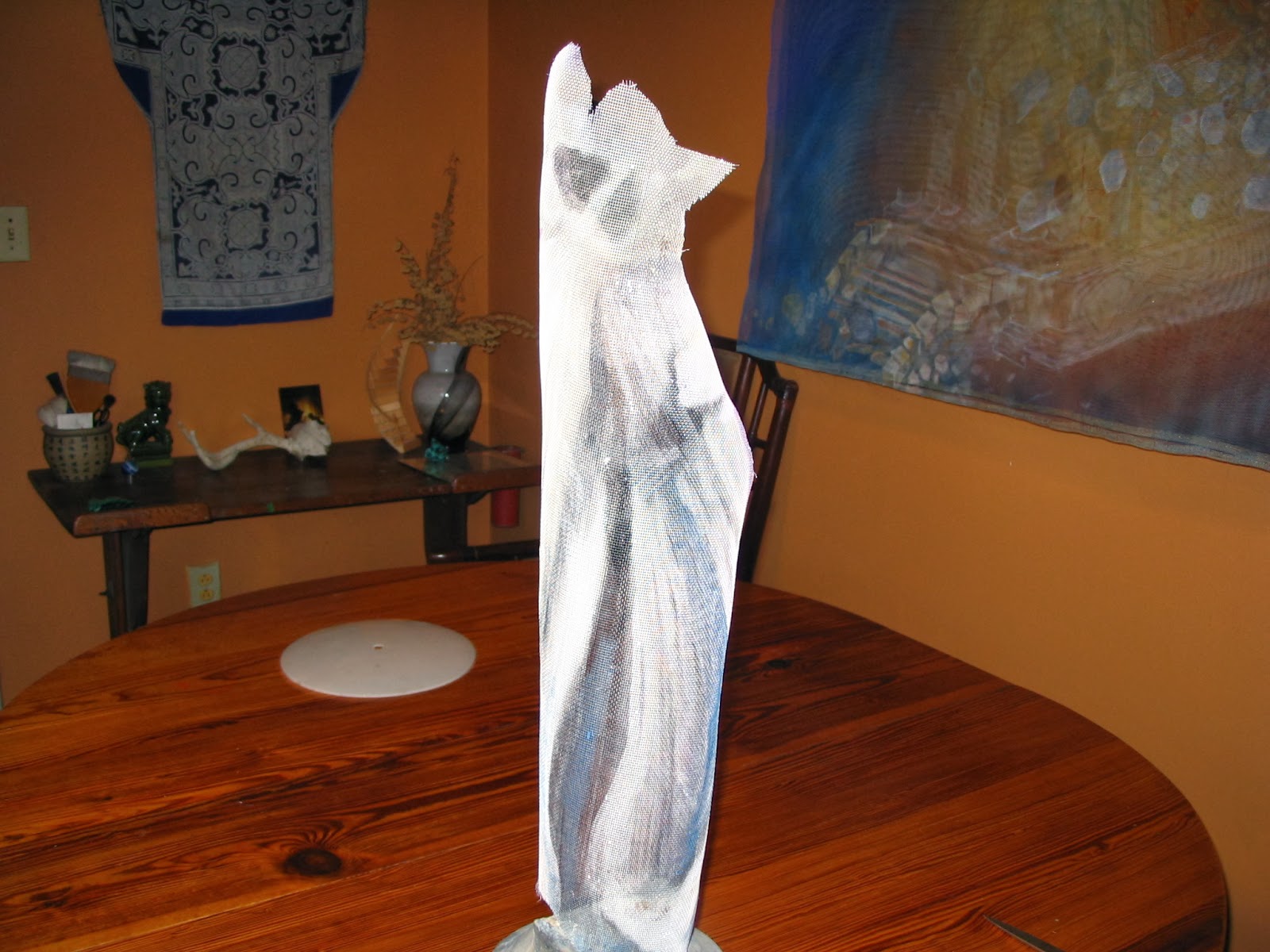 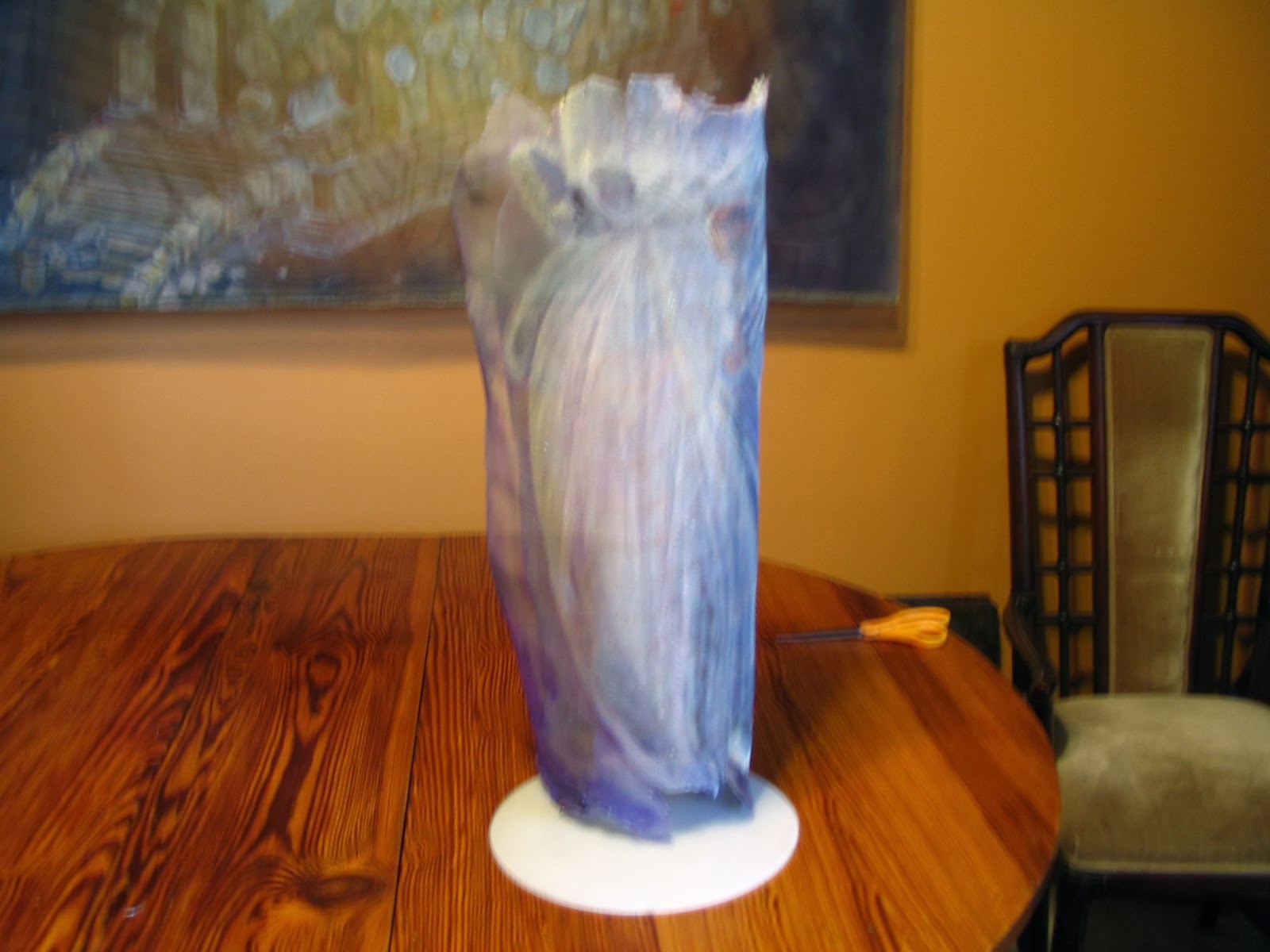 (These were done in the spring of 2009; the painting is four layers of screen and is 2' x2'; the "giacometti" Hebe is 8 inches wide and 22 inches tall; I am  revising the last piece somehow and have no idea of what will happen yet )

Posted by phillip larrimore at 5:28 AM