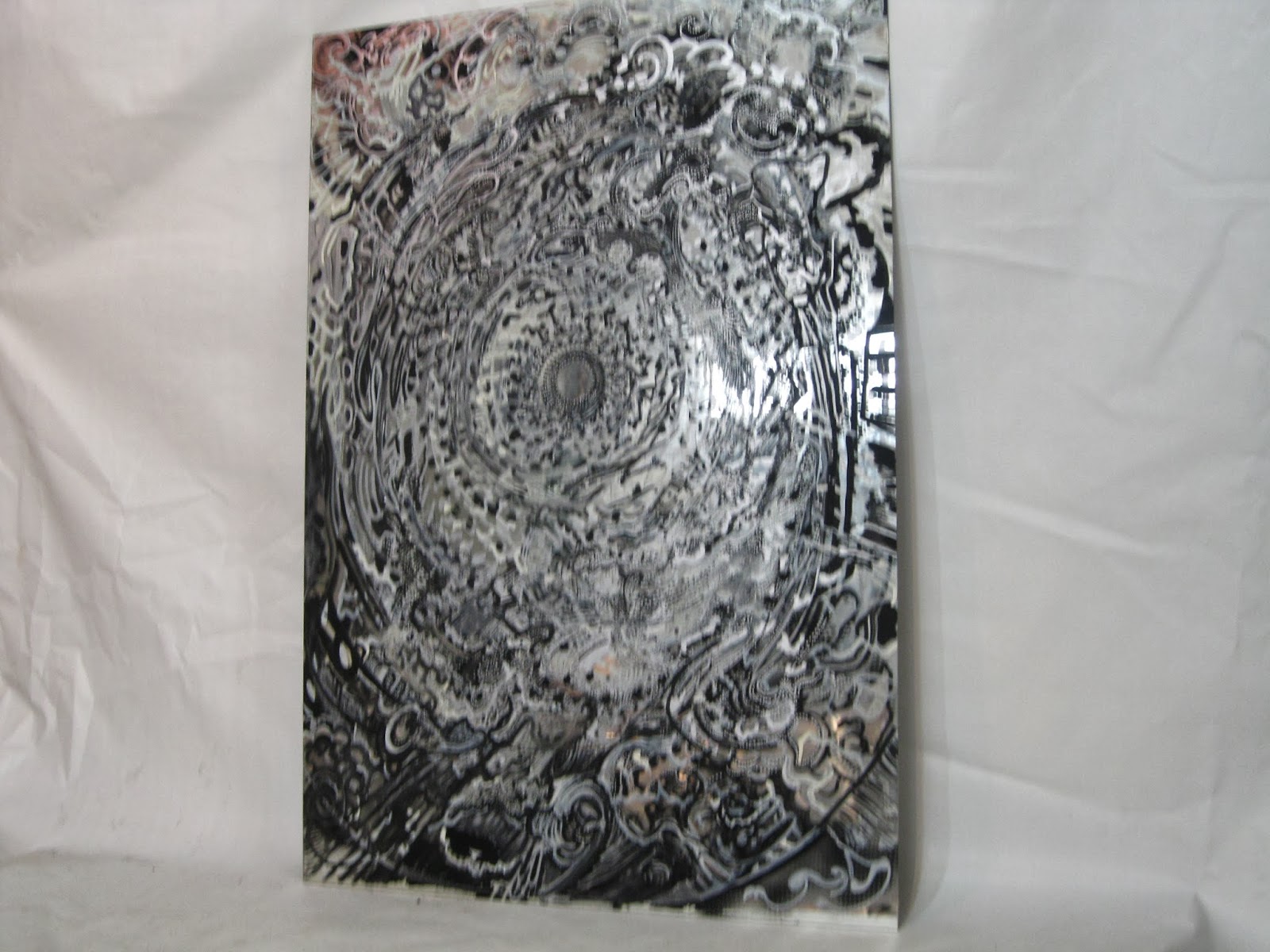 I seem  chronically  unable to make work which can be  straightforwardly reproduced. 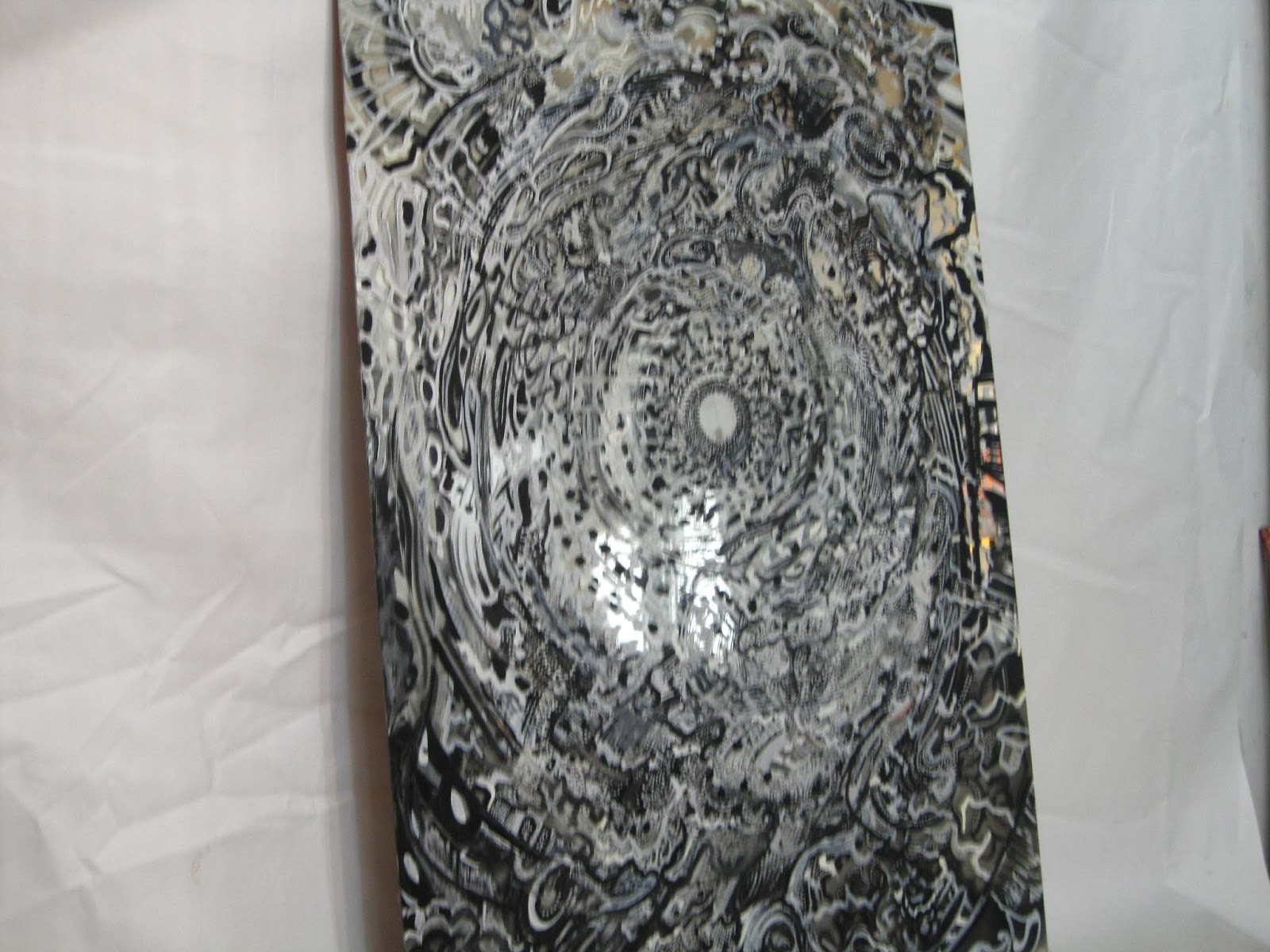 This " baroque mirror" from 1995 will serve as an example. It is meant to be a work in which the viewer
appears--but not the photographer. He is someone I would gladly eliminate entirely, but it is an effort to
disappear myself. I thought about sheeting myself in a white shroud, but this seemed  fantasticated. 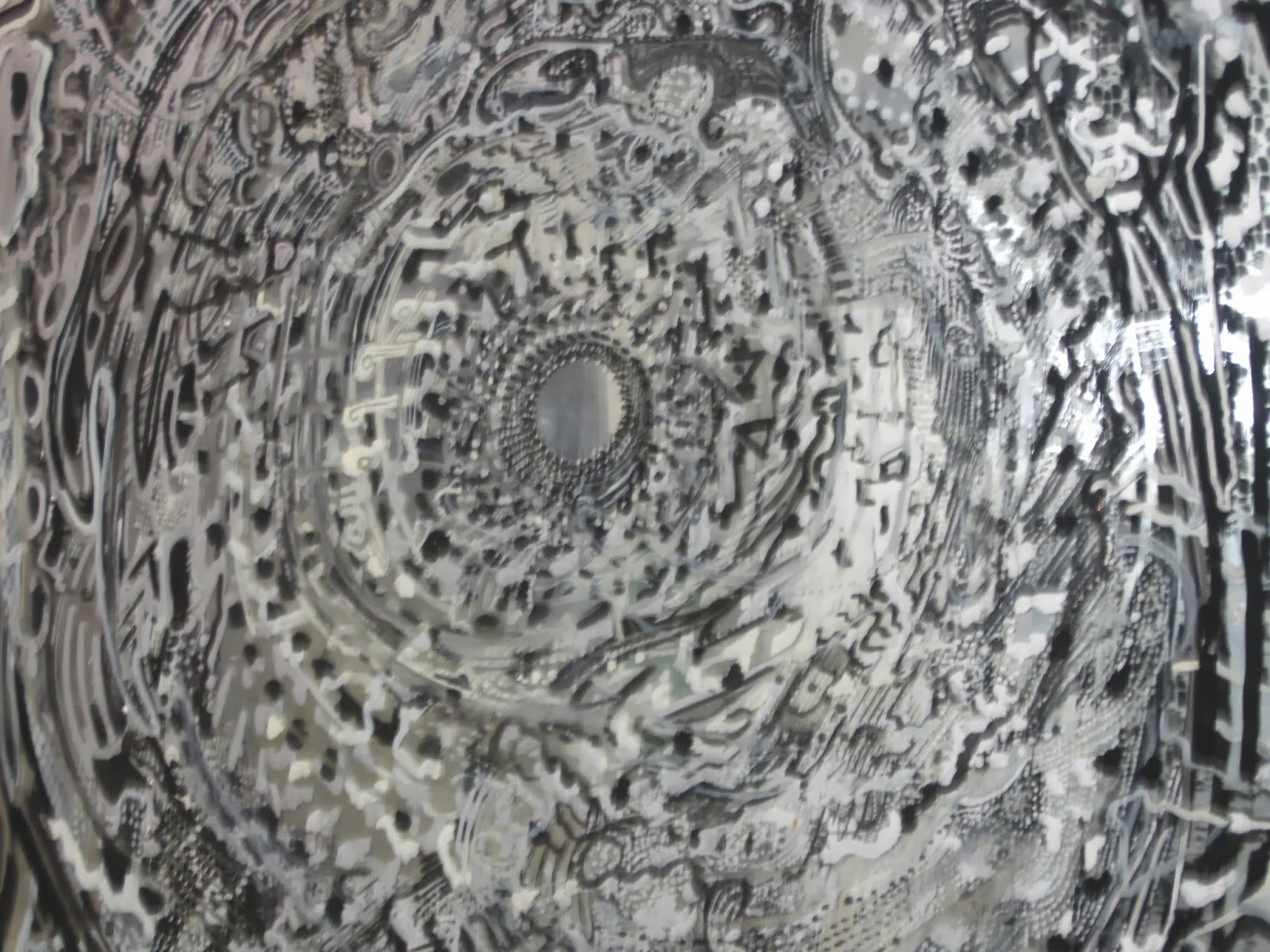 No more so,perhaps, than the thesis of this piece itself, which was to condense a baroque ceiling--including a dome--onto a sheet of mirror. I  wanted to blur the painting and the mirror in such a way as to almost erase the place where the one ends and the other begins.. For this reason , I used  a neutral palette
consisting of a flat white spray painted through lace onto which details in flat black, gloss black, gloss gun metal grey, metallic silver, and gloss white were added in increments. 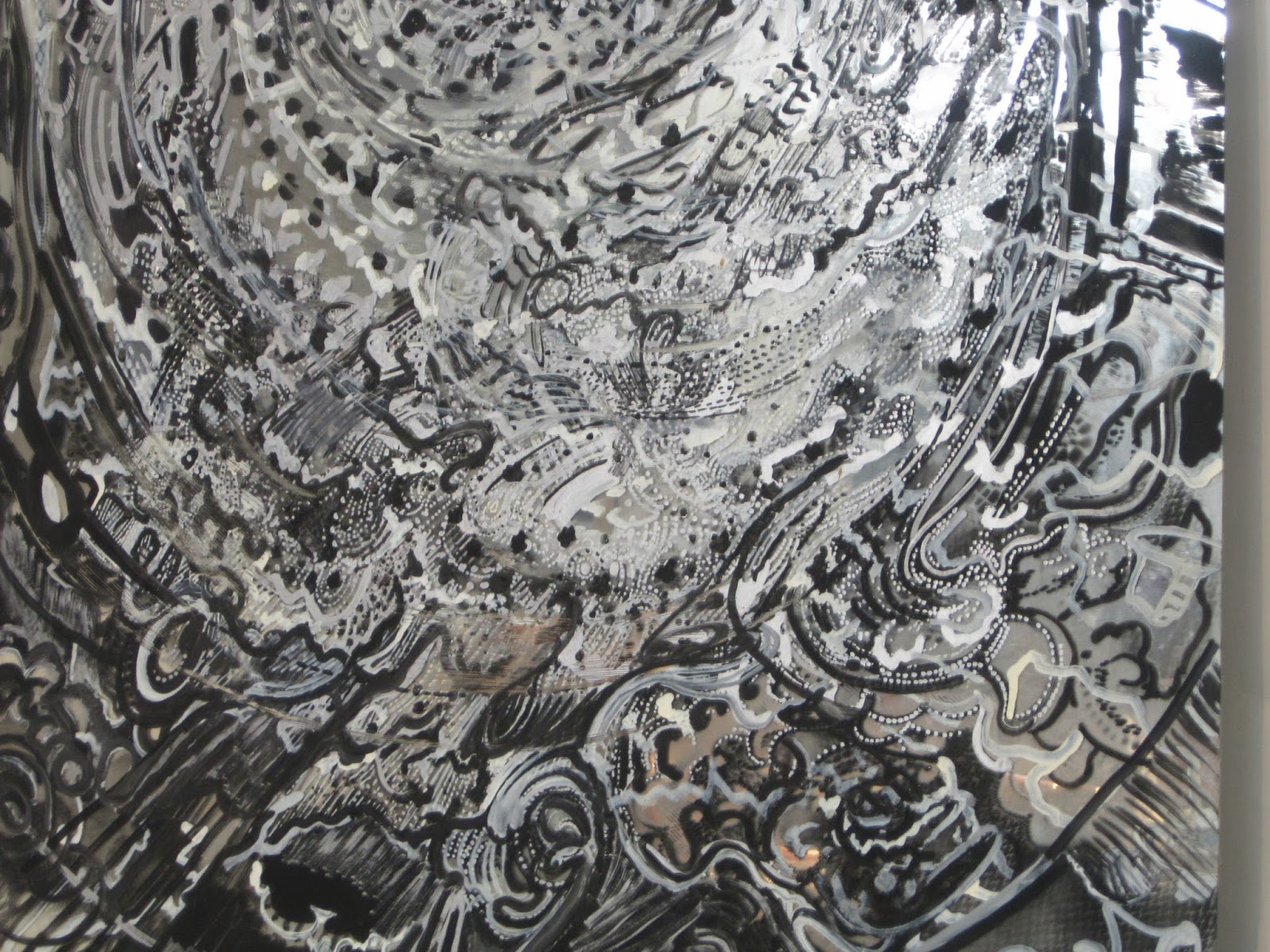 The lace through which I shot the " skeleton  image" was from a curtain for a baby's room, and featured smiling teddy bears holding balloons reading, "it's a boy" . This is my baroque mirror's preposterous origin. 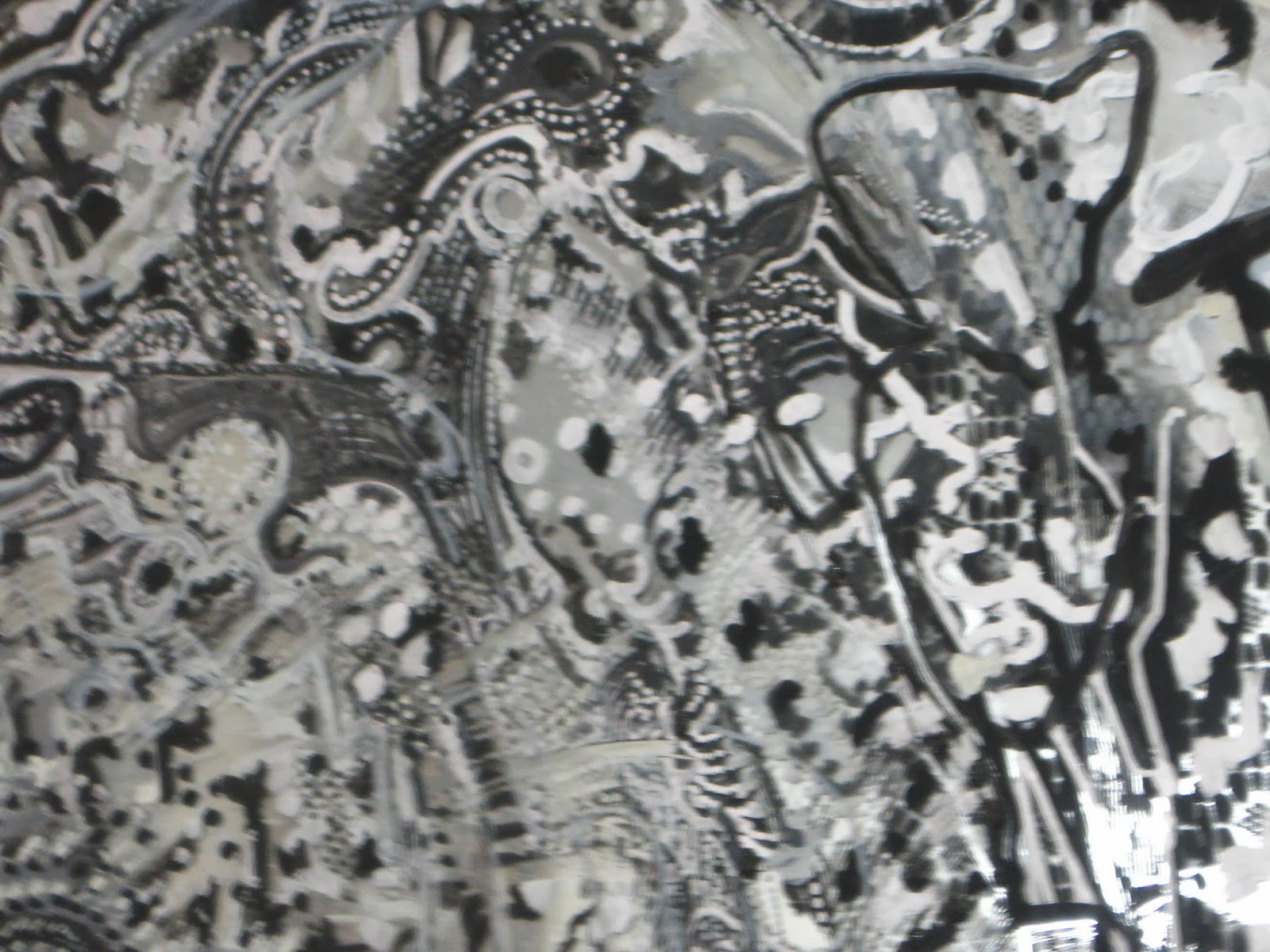 Another working  proposition  was  that if you take horror vacui far enough, it cancels
itself. Whether this is true or not, the piece makes a more unified impression--I hope--in person than in these
photographs. 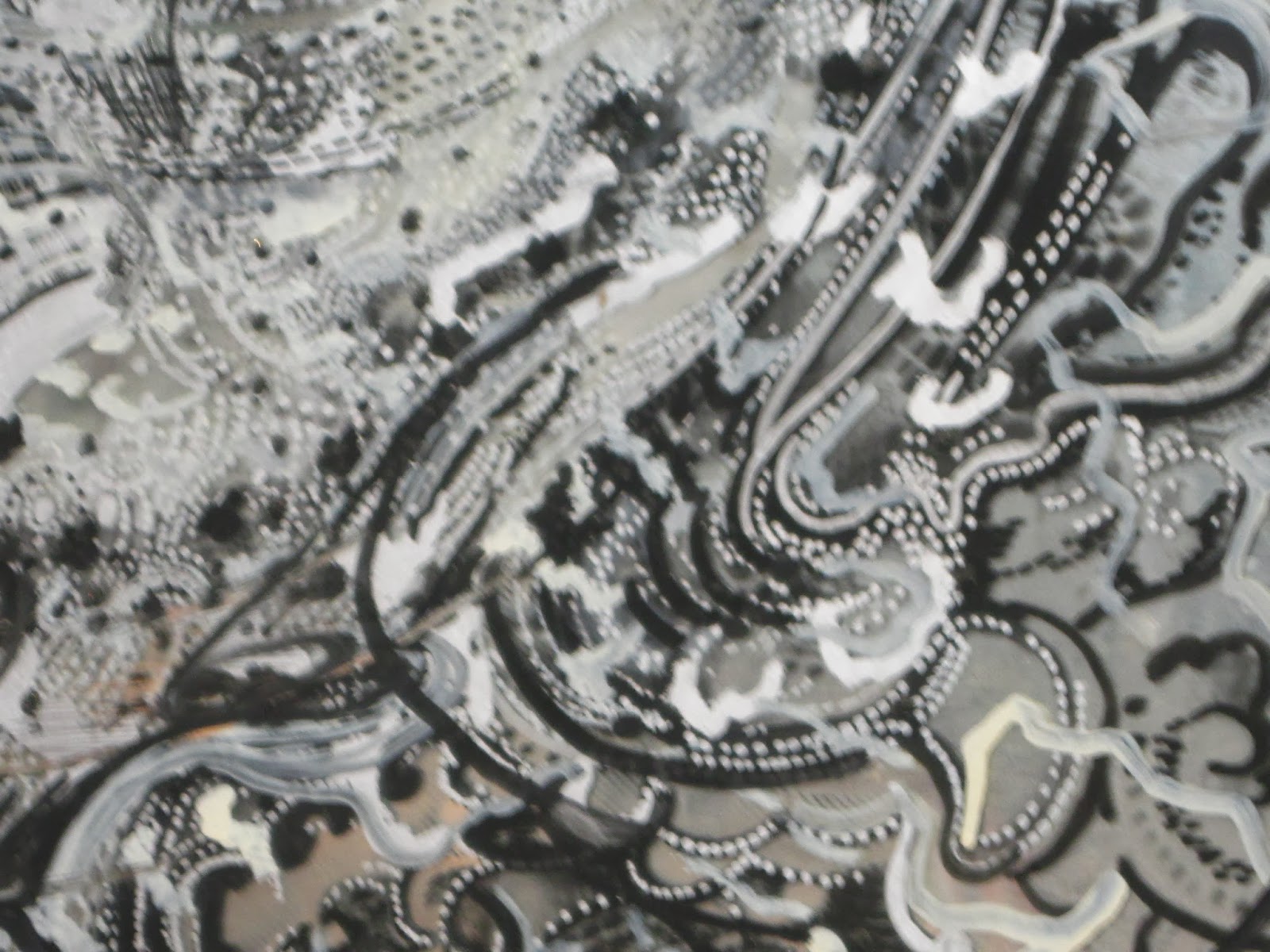 I only did a few such pieces. They were an extreme that I backed away from. 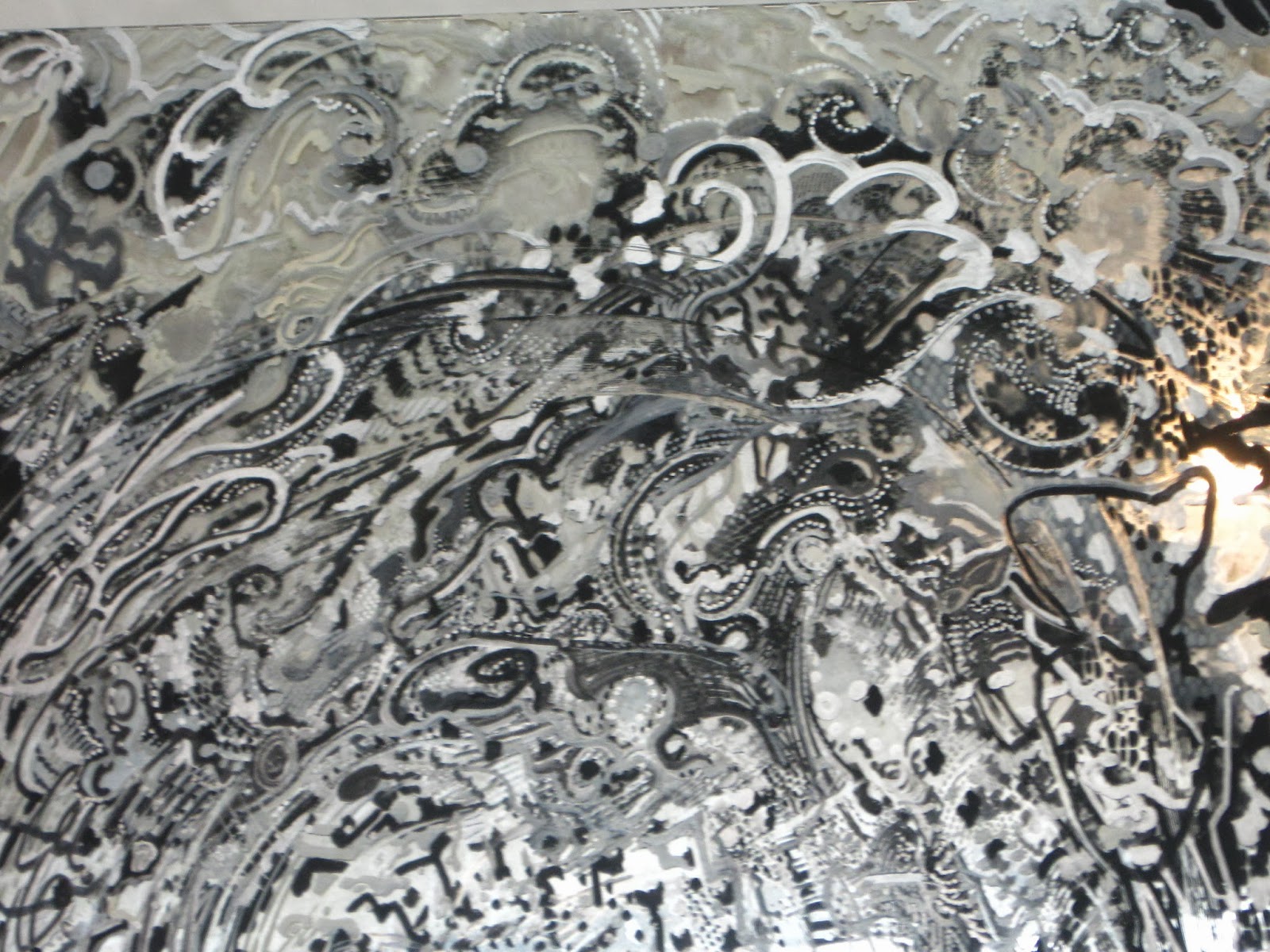 There was also the superstitious sense of being watched from the other side of the mirror by my dead---if a superstition may be understood as a notion not quite believed but entertained none-the-less. I was perhaps doomed to be haunted, then, and not only by my dead  but by lace teddy bears holding balloons.

This was done at roughly the same time as The  Black Mirror (for James Merrill) which was, however, done on thick plate glass.  I no longer remember which was done first, but both had been preceded by a number of studies on either window panes or small mirrors, and were to be the last flat pieces on glass or mirror that I did. They would be followed by a  larger number of paintings on  double or triple mirrors, but the slickness of  a glass surface was one which never quite appealed to my hand,  unlike working on aluminum  screening---which requires a fastidious lightness--or paper--where I can exalt in exactitude. This may sound odd, but glass--which can be revised, scrapped off ,or painted over--- forgives me a little too much.

(A Baroque Mirror; 1995; the mirror is 29" x 40", and is photographed from right to left, then left to right, and then in different sections)

Posted by phillip larrimore at 6:36 AM