THE FLORA AND FAUNA OF THE MOON 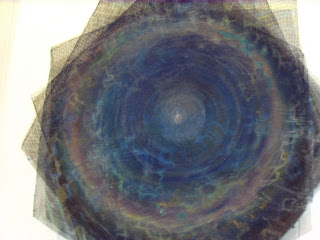 Interrupting what may be the most euridite sex scene in literature--which appears in The Dawn of Erewhon, the final story in Guy Davenport's 1974 collection, TAITLIN---is a translation of Jules LaForgues' Climat, faune, et faune
de la lune. LaForgue(1860-1887) is a wonderful poet, who has never quite gotten into English despite the advocacy of poet-critics as different as T.S. Eliot and Randall Jarrell. French friends
can not find a complete edition of his works in Paris.How could such a wonderful writer be ignored? Well, we ignored Monteverdi for three hundred and fifty years--it can be managed. The poem begins,

"I imagine in the evening cool
Your flora, fauna, and lunar weather,
Moon of the Immaculate Conception,
I, louse on a roof in Babylon.
Deep in your dim and halting nebula
I offer what I spin from my boredom
O barge floating upon nothing across
The night, along the dark's quays. desolate..."

What follows is in the realm of the taxonomic-fantastical,
enumerating mermaids licking their own tails, and
reindeers with cut-glass antlers, and polar
bears "grave as the Magi before the honey
Of divine silence..."floating hippoppotami,
luminous dugongs, lilies with hysterical smiles,
mushrooms like palaces...it is proto-surrealist,
true, but its splendor is its own,
and I have never re-read it without wondering
what it LOOKS like, Odilon Redon? Blake?
Windsor Mc Cay's LITTLE NEMO?
Joseph Cornell knew this poem,
I am sure, and half-intentionally illustrated it.
That,and Nerval's AURELIA. The part of French symbolist
literature on the cusp of the occult.

This poem has followed me ever since I read it, so much so
that I have half-intentionally illustrated it myself a
number of times. It coincides with the absurd
but persistant notion that the moon must
be sacrificially placated, which I half- believe,
somewhat on the lines of those statistics which testify to an
increase in suicides and murders during a full moon.
I try to suppress this Pierrot-Lunaire-ish, paleo-psychotic self
as much as I can but I have done a number
of versions of the Moon Poem/ Painting even so.Avatism is
stronger than rationality. Plus those dark blues
always draw me in..
There is a variant painted on a large window;
it was begun by shooting flat black krylon enamel
through lace, and then drawn upon,there have been drawings,
screen paintings, and even a collage
made of wallpaper on this theme over the years.
This is what happens when a poem resonates.


The latest of these was bought the other day by a friend
who is a country-western singer-songwriter. She does
hospice work, and described to me how she calmed a
twitchy, fearful, dying person by singing to them
a last lullaby. Such a person wanted something of mine.

The La Forgue poem ends,
"O stillness, stillness, to whom shall we give
The lunar crown? What lesson can be learned
From this quiet? Everything has kept
Faith with the same negation of being
Day after Day, saying nothing at all
or asking why...
"You will not get to the end of it sane
but with that idiotic smile of the of the marble Greeks,
For all this will not stand in a mirror
Dead. And you forget as you turn away.

We will return and press the question, Ah!
when we have understood the coral isle."
Posted by phillip larrimore at 12:42 PM